Wiesberg Castle - Holiday in the holidayregion TirolWest
We use cookies to personalize content and ads, to offer functions for social media and to analyze access to our website. We also provide information on your use of our website to our social media partners, advertising and analyzes. Our partners may carry this information together with other data that they have provided them or who have collected them as part of their use of services. Read more...

High above the wild foaming Trisanna Wiesberg Castle sits on a woody rock.

The castle was probably built in the 13th century by the Hochstift Chur.  As a fief of the Counts of Tyrol, the castle was the property of the powerful Rottenburgers, whose ancestral castle was located above Rotholz in the Lower Inn Valley. Since the extinction of this family in 1411 Wiesberg was princely property and was mortgaged several times, most recently in 1770 to the Counts of Wolkenstein, where it remained until 1840. In 1809, near the castle, a fierce battle took place between the Bavarian troops and a few hundred Paznauner and Stanzertal archers.

Schloss Wiesberg is currently privately owned and is not accessible to the public.
Read more 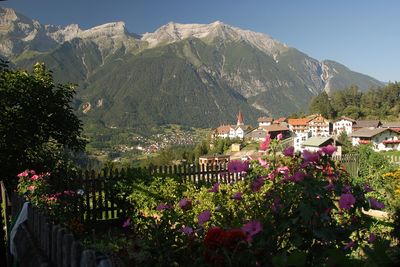 Beautiful hike from the mountain village Tobadill to the castle Wiesberg and the famous Trisanna bridge.

Beautiful hike from the mountain village Tobadill to the castle Wiesberg and the famous Trisanna bridge.